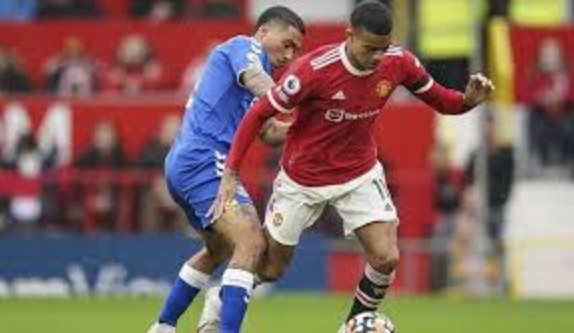 Manchester united entered the fixture as the favourites and did not disappoint as they went 1-0, early in the second half after Bruno Fernandes set up Antony Martial to score a superb shot that left Pickford hopeless. Manchester United then proceeded with great possession only for Ole Gunnar to make substitutions to bring in Jadon Sancho and the main man Cristiano Ronaldo. It all went to shambles after some minutes after Demerai Gray showed great resilience with the ball driving it forward and passing to Doucoure who turned and set up Andre Townsend for the equalizer.

Townsend send a superb low shot towards the goal leaving De Gea rooted to the ground. With about two minutes left in the game, Everton took control and looked the better team as they maintained possession and looked better on the counter attack. With less than ten minutes left for the game to end, Davies found a loose ball I the Manchester united box and teed up Mina to score, only for the referee to call for offside after VAR review. The saw the game between Manchester united and Everton to end as a draw, Man United with a sigh of relief.

The draw leaves Manchester United third in the premier league behind Liverpool and Chelsea. Everton are fourth followed by Manchester city that have a game in hand versus Liverpool. Manchester United now have only one win in their last four matches despite having Cristiano Ronaldo. Everton despite lacking their most important players that include Calvert Lewin and Richarlison managed a draw with Manchester United although they were the better side in overall.

Watch Manchester Utd vs Arsenal live from the old Trafford. Manchester united vs arsenal is one of the biggest games in the premier league without a doubt. From a devastating 6-1 defeat to Tottenham, Manchester United have had a impressive run taking three points from Newcastle and one point from Chelsea and most recently beaten…

You can watch RB Leipzig vs PSG live online for free. Both having lost to Manchester United in the champions league group stage, RB Leipzig and PSG go head to head in an entertaining match to fight for the quarter-final spot as they both have 3 points whereas Manchester United has 6 points and currently…

15 Richest Footballers in South Africa Football is a popular sport globally, and South Africa is no exception. Soccer stars who are greatly talented and skilled earn a lot of money and have high market values. They also get to represent their countries on the international scene as well. South Africa has quite several players…